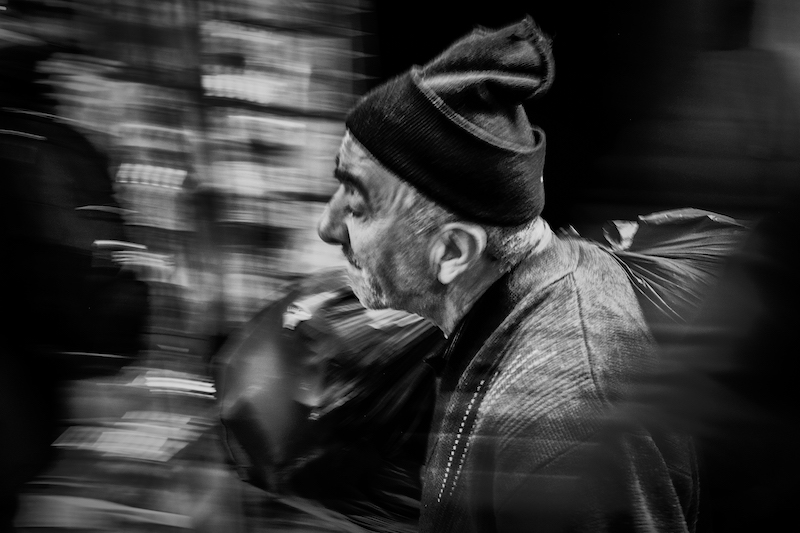 Street photography in Jerusalem can reward the avid travel photographer with some of the most memorable images of everyday life of this amazing city. We run photo workshops around the world, yet Jerusalem, the capital of Israel, has always been at the top of our list because of it’s unique mix of photogenic locals, religious traditions, fabulous backgrounds and quality of light. We are passionate about photography, and understand that each photographer visiting Israel has their own particular genre of subjects that appeals to them, wether it be architecture, landscapes, environmental portraits or street photography. For that reason we customise our photography tours for the individual, to ensure that your time spent with us is as productive, inspiring and enjoyable as possible with your limited time.

Home to the 3 monotheistic faiths, and with a heritage of over 5,000 years, Jerusalem is one of the oldest cities in the world. It’s tumultuous history has seen it attacked 52 times, captured, recaptured, besieged multiple times, and destroyed twice. Spirituality plays an important role in Jerusalem, and in particular in the Old City, where sites associated with the Bible are everywhere. Divided into 4 quarters, comprising of the Jewish, Christian, Armenian & Muslim quarters, this ancient part of the city is a melting pot of the faithful, and is of vital importance to the Abrahamic faiths. Likewise, the unique diversity of religions, denominations, and ethnic groups makes Jerusalem one of the most photogenic places in the world.

Arriving to the ancient walls surrounding the Old City, the photographer will undoubtedly be thinking of using it as a backdrop during Golden Hour, as the locals wander in and out of one of the entrance gates, with their huge, decayed doors. These gates date back from between Babylonian times up until the Ottoman period in the 16th century. More recently, many are covered in bullet holes, testament to the 1948 Arab-Israel war and 6-day war in 1967. Arriving to the Western Wall [or Kotel, as is known in Hebrew] in the Jewish quarter, can be an emotional experience for Jews and non-Jews alike. It is the most sacred site in the world to the Jewish people, and the only remaining structure of the Second Temple. The focus of Jewish aspirations and pilgrimage, this site can yield images of the faithful from secular to orthodox as they are deep in prayer.

Open 24 hours a day, the only time the Western Wall should be avoided for the purposes of photography is from Friday afternoon until Saturday evening, during the Sabbath period. Likewise, it is practically forbidden to take photos on the annual day of atonement, known as Yom Kippur. Every other day can yield excellent images, however when religious holidays such as Sukkot, Shavuot, Rosh Hashanah and Simchat Torah occur, a truly amazing spectacle awaits the photographer. Knowing when religious holidays occur is paramount when planning to visit Jerusalem. Late afternoon tends to yield the best light, with shadows of the worshippers cast onto the ancient stones, though there is an interior section of the men’s side with artificial light that you can shoot in at any time of day, as long as you are respectful of the people in prayer.

Continuing around the Jewish quarter, you will notice that the architecture in many of the streets appears newer and more renovated than the other parts of the Old City. Equally beautiful, though with less decay, the Jewish quarter has been restored to it’s original glory from it’s destruction dating back to the Roman, then Ottoman periods, and more recently, from the Jordanian rule during the 1948 Arab-Israeli war. A good example of this continuous friction is the beautiful Hurva Synagogue. Founded in the early 18th century, it was destroyed by Muslims a few years later, rebuilt in 1864, only to be destroyed again by the Arab legion during the 1948 war. Today this magnificent structure stands proudly in the heart of the Jewish quarter, since it’s complete rebuild in 2010.

Centred around the Church of the Holy Sepulchre, the Christian quarter contains sites of major significance to local Christians, and from around the world. You can witness this first-hand during Holy Week, where thousands of Christian pilgrims from around the world flock to Jerusalem to follow the footsteps of Jesus from his entrance down the Mount of Olives, until his crucifixion and resurrection. Countless churches and narrow, ancient alleyways are dotted around the Christian quarter extending from the New Gate, and along the Western Wall, to the Jaffa Gate, and up to the Damascus Gate.

Some of our favourite street photography is captured in this quarter of the Old City. Environmental portraits of priests, nuns and orthodox clergy in religious garb wander the ancient lanes, converse with each other outside juice bars, and pray at some of Christianity’s most holy sites. Jerusalem is the heart of Christianity, and followers from all over the globe have settled here. Jerusalem is the only city in the world with some 15 different Christian communities living alongside each other, making it one of the most diverse city’s in the world. From the Russian orthodox to the Ethiopian Copts, the incredible diversity will make you wonder why you didn’t plan to stay here longer. No matter how many times we visit the Christian quarter, new photo opportunities arise thanks to it’s mix of beautiful light, incredible backgrounds and photogenic faces.

On top of the hill, known as Golgotha, stands the Church of the Holy Sepulchre – the site of the crucifixion, burial and resurrection of Jesus. Entering the doors of the unassuming exterior, and you will find devout followers from every corner of the globe. Candle-lit monks removing prayer candles from pools of hot wax, Russian pilgrims rubbing material on shrines to absorb it’s sanctity to take back home, young priests chanting incantations, Armenian priests swinging incense censers, Ethiopian copts clutching on the column split in the Holy Fire.. One of the best times to visit this church is in the late afternoon, when each denomination of shared ownership proceed from the Cavalry to the tomb.

Heading to the Muslim quarter, the largest quarter in the Old City, is reminiscent of arriving to a confusing labyrinth. One can easily get lost in it’s network of narrow alleyways, and likewise stumble across surprising photographic gems. Get past the souvenir shops in the bustling Shuk, and you will find that the Muslim quarter is the most bustling and least visited by tourists. The busy alleyways are often filled with residents, and due to the architecture and covered roofs, low light and atmospheric scenes with directional lighting are perfect for street photography. Likewise, this is a good area to practice panning shots as the locals hurry past to get to mosque for worship or to get their groceries.

Speaking of shopping, the Muslim quarter’s bustling market is a true Middle-Eastern experience. Everything from cardamon flavoured coffee, to baklava, to spices, to fake branded clothing and pirated DVD’s can be found here. As with many aspects of life in Israel, confusion reigns, and many visitors are surprised to know that some of Christianity’s most important sites are located in this quarter, such as the Via Dolorosa, as well as other sites of major importance to the 3 Abrahamic faiths. But it is the Temple Mount that the Muslim quarter is centred around. Without a doubt, the most iconic structure of Jerusalem is the shimmering gold Dome of the Rock.

According to the Bible, the Jewish temples stood on the Temple Mount. Dating back to 957 BCE, the location is the holiest site in Judaism, the third holiest to Muslims, and is consequently the site of the most friction between the two faiths. There are eleven entrance gates, one of which can be entered by non-Muslims, near the Dung Gate at the Western Wall. Upon entering the large open plaza, you will experience one of the most hotly-contested sites in the world. As security here is very tight, one should not feel unsafe, on the contrary, the large open area with it’s beautiful architecture is a welcome retreat from the busy shuk. Likewise, some quality images can be had of Palestinians having a picnic or children playing soccer in the courtyard, with the Dome of the Rock in the background – perfect for environmental portraits and story-telling shots.

Leaving the Old City, we arrive to one of our favourite locations for Jerusalem street photography. The neighbourhood of Mea Shearim [100 Gates in English], is one of the oldest Jewish neighbourhoods of Jerusalem. Populated by Haredi Jews, the area has an insular community with characteristics of an Eastern European village. Strictly orthodox, and suspicious of outsiders, one cannot avoid the signs around the entrances requesting outsiders to respect their neighbourhood by adhering to dress code. Don’t even attempt to photograph, smoke or drive in this area on the Sabbath. Apart from backgrounds with an air of urban decay, the locals here wear traditional dress including, black frock coats and black hats, long beards and sidecurls, women are also completely covered. They live simple lives, completely detached from modern society. Modesty is of the utmost importance in their community, and they are completely devoted to religious study. This neighbourhood is a personal favourite to shoot in during the religious festival of Purim.

Arriving to the Mahane Yehuda market is like another world from the ultra orthodox neighbourhood of Mea Shearim. Our final preferred location for street photography, this market is at it’s best on a Friday, when the locals stock up on produce before the start of the Sabbath. Modern and thriving, this dynamic food market is packed with the weird and wonderful. Chaos is the best way to describe this place, as the locals from all over the city jostle around the market stalls. The aromas of spices, fruits, fish, baked bread, falafel and about every other food available is combined with the constant noise of talking, laughing and shouting. This place really is an overload for the senses. Environmental portraits are especially good to capture here, as the market traders tend to stay at the same spot, leaving you to concentrate on composition and timing. When the market start to close, we love using the shutters covered in street art to add context to scenes. Even when completely closed, the market is open to walk through, and can make for a great ending to a memorable tour.

For many, Jerusalem is more of a state of mind than a typical tourist experience. Learning to capture the atmosphere through candid scenes of everyday life is challenging, and we would love to show you our own techniques in overcoming these difficulties, learned from years of experience in instructing street photographers.