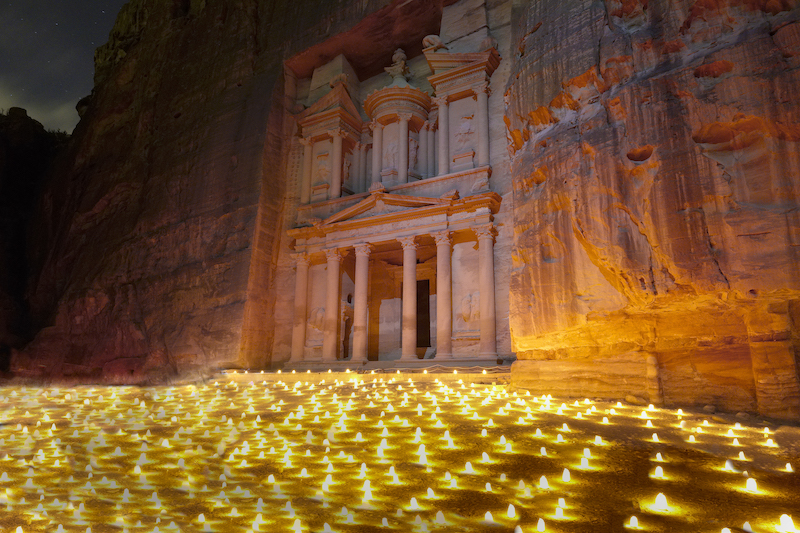 New to 2022: For travel photographers heading to the Middle East, we have now created an exciting new photography workshop itinerary. Covering the southern, arid regions of Israel including the Dead Sea, Negev Desert, Masada and the Ramon Crater, the workshop combines these sites in Israel with Petra and Wadi Rum in Jordan. The result is a mix of landscape, architectural, astronomical and environmental portrait photography in one of the most unique and photogenic regions on earth. This photo workshop is an excellent choice for photographers visiting Israel, by extending our 4 day Petra and Wadi Rum photography tour into a 9 day photo workshop.

We are delighted to announce the inclusion of a 4 day Petra & Wadi Rum extension to our Israel Photography Workshops. Guests that continue with us after experiencing our Israel & Holy Week adventures will have the opportunity to visit Jordan’s most photogenic area of natural beauty, and a lost city frozen in time. Located with the Eilat border in Israel lies the border of Jordan in Aqaba – our gateway to the magnificent mountainous desert of Wadi Rum. A protected desert wilderness covering over 700 square kilometres of dramatic landscapes, this arid area contains sandstone mountains reaching a height of over 1,700 meters, unusual rock formations in sandstone and granite, narrow canyons known as Siqs, and rock carvings etched by it’s inhabitants dating back millennia. The residents of Wadi Rum are made up of Bedouins, a nomadic people that typically live in the desert and whose livelihood revolve around herding goats. Their hospitality is legendary in the Middle East.

Wadi Rum can best be described as a magical place. A wonderfully photogenic desert landscape of sandstone mountains, canyons, rock formations and sand dunes, the colours of the sand and rock change into a striking red colour during magic hour. Sunrise and sunset in this location is simply spectacular. Lawrence’s Spring is thought to be the site of where Lawrence of Arabia led the Arab revolt and shaped history to what is the Middle East of today. The harsh environment of Wadi Rum has been inhabited for thousands of years, and was also occupied by the Nabateans, of which some structures still stand. Ancient rock inscriptions in the Khazali canyon, photogenic faces of the Bedouin tribes in traditional dress, caravans of camels passing through the landscape, photographing the night sky with the amazing rock formations – Wadi Rum will satisfy just about any adventurous photographer.

For the first-time visitor, this unique desert environment makes one think of an ideal backdrop to an epic movie set. Unsurprisingly, Wadi Rum is a favourite among many filmmakers and producers, and has been used in a variety of films, including:

Our accommodation in Wadi Rum is at a luxury campsite in the desert, where you can enjoy hot water showers, in beautifully decorated air conditioned cabins. After spending the afternoon, evening and following morning photographing Wadi Rum, our adventure continues when we leave the desert and drive to our hotel in Petra. Here we will enjoy 2 nights at our luxury hotel, while we head out to capture the wonders of Petra at different times of day and during the most interesting light. Dating back to 9,000 BC the rich history of Petra is as intriguing as the city’s structures themselves. It’s location on the eastern flank of the Arabah Valley was an ideal site as a trading hub at the crossroads for major trading routes. This created huge revenue to it’s Nabatean inhabitants. The Nabatean kingdom consisted of masters of their craft. Known as early scientists, their skill in sourcing and containing water, architecture and agricultural techniques left their mark and were not even surpassed by their Roman conquerers.

For the first-time visitor, heading through the 1.2km gorge [known as a Siq] gives a sense of expectancy of what lies ahead. The Siq itself is very photogenic, with it’s narrow winding path through tall slabs of sandstone. Arriving to the Treasury at the end is what Petra is famous for. This iconic structure in beautiful rose coloured rock has been so well preserved, one would be forgiven for imagining it was just created. Exploring this ancient city can take days, but we have created a route to take advantage of the best locations for photographers, and during the best lighting conditions. This also includes visiting Petra by night, where thousand of lanterns are lit to illuminate the Siq and Treasury – a perfect ending to a memorable experience. We would be delighted to have you join us on one of our Wadi Rum / Petra photography tours. Please feel free to contact us with further queries on our schedules.