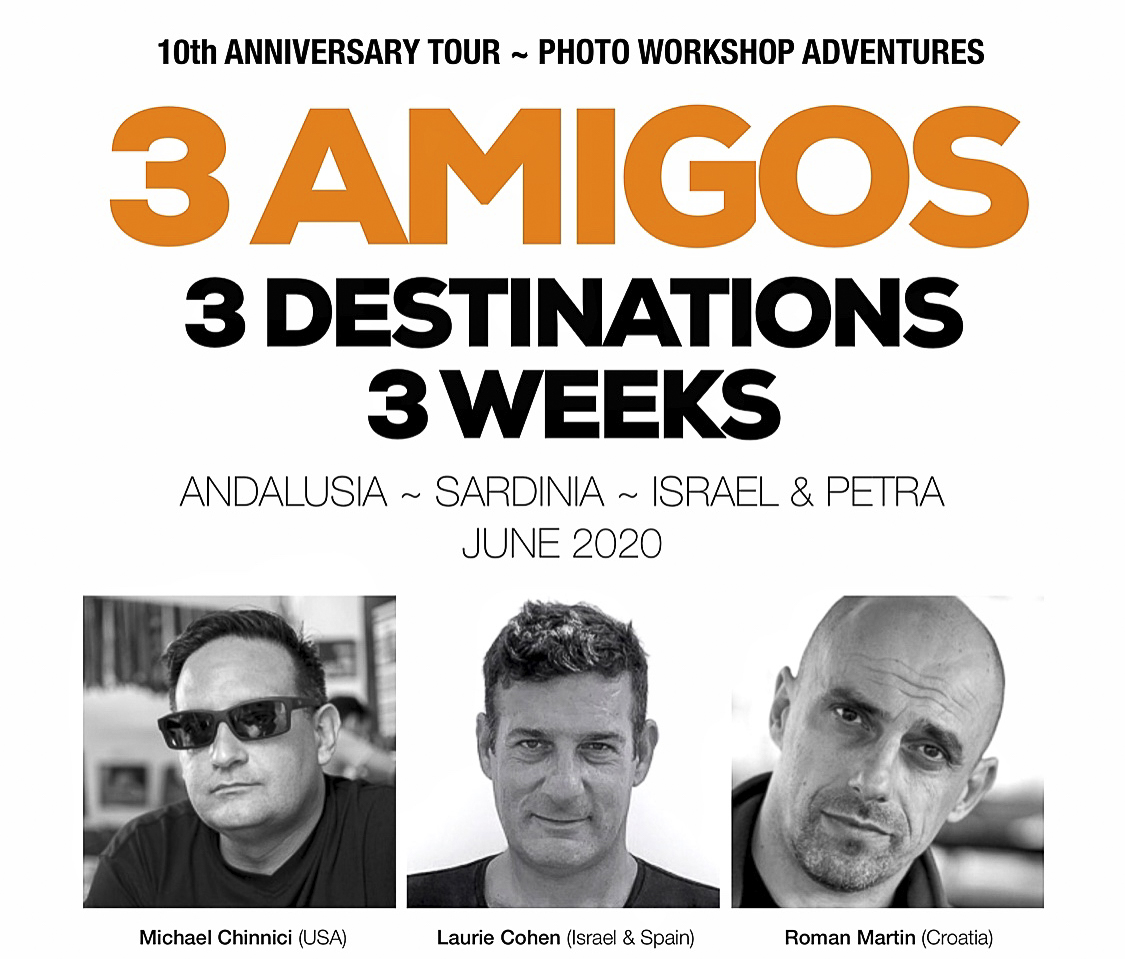 As part of our scheduled Israel Photography Workshops, and to celebrate the 10th Anniversary of Photo Workshop Adventures – our affiliate with over 150 photography adventures in over 50 countries, we have the absolute pleasure of announcing a unique, one-time photography opportunity: In addition to our other international photography workshops, our 3 AMIGOS, 3+ DESTINATIONS, 3+ WEEKS adventure will allow you to explore 4 amazing destinations across the Mediterranean.

Led by photographers, Michael Chinnici [USA], Roman Martin [Croatia] & Laurie Cohen [Israel], your photographic journey begins in Andalusia in Southern Spain for 7 days, before continuing to the Italian island of Sardinia for 5 days, then a 10 day adventure through history in Israel, before ending with a spectacular 4 day desert adventure in Jordan. You may select just one destination, combine two, or visit them all from as little as 5 days or all 28 days.

Andalusia: At the meeting point of the continents of Africa and Europe, the Atlantic Ocean and the Mediterranean Sea, the region of Andalusia covers over 17% of Spain and is larger than some countries within Europe. Located in the southernmost part of Europe, Andalusia offers wonderfully diverse landscapes and geographical terrain. Over half of the terrain is mountainous, while it’s length borders coastal areas, rivers, marshes, high plateaus and desert. Within the space of half an hour, you can be in Alpine forests before arriving to tropical coastlines.

And it’s not just the stunning landscapes on offer. With a rich history, remnants of it’s past can be found from Andalusia’s towns to quaint villages. Columbus set sail from the port of Palos in 1492 before discovering America. Moorish, Renaissance and Baroque influences make up a wonderful mix of diverse cultural heritage, which is clearly shown in the architecture. Castles, monasteries, churches and mosques in the most elaborate and detailed fashion are just waiting to be explored with your camera. And then there’s the food! From Gazpacho, to Manchego cheeses, to seafood, to the regional wines, we doubt you will go hungry in Andalusia.

Sardinia: Undoubtedly one of the most beautiful islands of the Mediterranean, Sardinia has only relatively recently been discovered by tourism. Apart from the highly exclusive Costa Smeralda on the north eastern coast, the rest of the island also offers a beautiful and diverse countryside, from impressive mountain ranges to stunning white beaches with emerald green water. Unique to the island are an incredible amount of prehistoric dwellings and fortifications that date back to the Roman, Phoenician, Bronze and Iron Age. These structures, together with a lack of light pollution, can make for some interesting night and astro-photography.

Throughout Sardinia’s tumultuous history, remnants of the past have found it’s way into the architecture, language and cuisine. Arabs, Greeks, Catalonians and others have conquered and settled here, all leaving their mark and shaping what the island is today. For street photography and environmental portraits, on special occasions, the residents of villages throughout Sardinia wear their own unique costumes. Colours, cuts, adornments and even how their horses are dressed are absolutely unique to each village.

Israel: One of the most exciting and surprising destinations that you are ever likely to visit, few places in the world stir up as much passion as the Land of Israel. With over 4,000 years of history, and with major importance to Judaism, Christianity and Islam, an air of spirituality is embedded in every city, street and rock. While the liberal, free-loving partygoers of Tel Aviv seemingly live life in a bubble, nothing could contrast more than the orthodox Hassidic Jews that reside in Jerusalem. Also unique to this part of the world are it’s diverse ethnic minorities – Druze, Bahaia, Samaritans and others make up this melting-pot of the country. Israel is all about it’s incredibly diverse people. As well as being an amazing destination for portraits, street photography and environmental portraits due to it’s incredibly photogenic people, Don’t forget about the architecture!

Due to it’s long and turbulent history, there is a multitude of religious sites associated with the Bible. From the remains of Judaism’s Second Temple known as the Western Wall, to the Al Aqsa Mosque, where Mohammed was said to ascend on a winged beast, to the Mount of Olives, where Jesus was said to enter Jerusalem, Israel will leave it’s mark even on the most hardened atheist. One of the benefits of touring a small country such as Israel is exploring unique landscapes and topography without long distances on the road. From the green hills of the Galilee to the alpine climate of the Golan there is a stark contrast to the barren Negev desert and the Dead Sea at the lowest point on earth.

Petra & Wadi Rum: As an extension to our Israel adventure, we have included a memorable trip to 2 of the most photogenic locations in Jordan. Easily accessible by the land border with Eilat in Israel, the gateway to the desert of Wadi Rum can best be described as a magical place. A protected desert wilderness, you will be captivated by the sandstone and granite mountains that reach over 1500 meters high. Amazing canyons, rolling sand dunes, rock inscriptions dating back 12,000 years, and a bed of red sand await the adventurous photographer. Your first impression will be that of a lunar landscape. Unsurprisingly, Wadi Rum has been used as a background for many science fiction films. This region of Jordan is inhabited by the Bedouin people. Nomadic tribes whose hospitality is legendary in the Middle East. Landscape photographers will feel right at home here, though some excellent opportunities for portraits of the local Bedouins in traditional clothing can also be had.

Continuing north from Wadi Rum, we arrive to Petra, the Lost City. Known as one of the 7 Wonders of the World, Petra is a masterpiece of engineering and infrastructure. This pink rose ancient city dates back to the first century BC, and was constructed by the Nabateans. Due to it’s location at the junction of trading routes, Petra was once a thriving hub. Even though visitors will find the site spread out over a vast area, it is thought that 85% of the city is actually still buried underground. Throughout it’s turbulent history, where it was taken over by the Romans, then later the Byzantines before falling into obscurity. In 1812 the geographer Johann Ludwig rediscovered it, hence it’s nickname of “The Lost City”. Petra and Wadi Rum are astounding locations for photographers, and make for a fitting end to this photography journey. Please feel free to contact us for further information on this 3 Amigos Adventure. We hope to see you there!