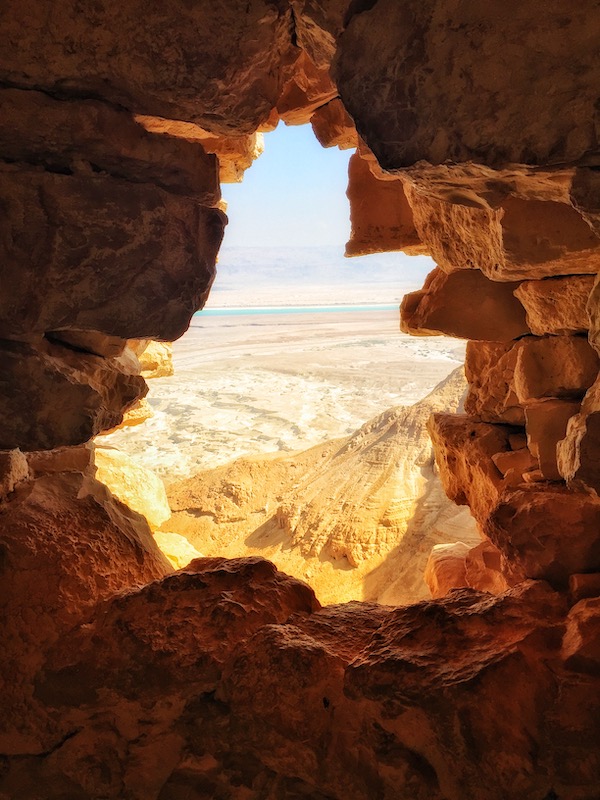 Photograph iconic Masada through your lens

One of the most dramatic stories of the Jewish people is also the site of some of Israel’s most dramatic scenery. Landscape photographers interested in adding historical context into their images will surely find Masada to be one of the photogenic highlights in Israel. The word Masada literally means “fortress”, and when seen from above, the reason is undeniably fitting. Located on top of an isolated mountain at the eastern edge of the Judean desert, Masada overlooks the Dead Sea and Jordanian mountains beyond.

First fortified by Alexander Jannaeus, one of the kings of the Hasmonean dynasty at around 100BC, it is usually associated with Herod the Great and the fortifications and palaces he built there between 37 and 31BCE. In it’s prime, Masada was a model of a self-sustaining society in a harsh environment. Gathering water through a series of aqueducts and canals, then channeled into cisterns, preserving foods with oil, vinegar and drying, storing seeds to plant in the surrounding areas, dovecots created for eggs and dove meat, as well as other means of sustaining the inhabitants meant that this fortress was a seemingly ideal balance of sustainability and safety.

But by 73CE, not long after the destruction of the Second Temple by the Romans in Jerusalem, the Roman governor of Ludaea headed the Roman legion and laid siege to Masada. This is where the story of martyrdom and defiance emerged, after an overwhelming Roman force with a battering ram breached the wall of the fortress. Rather than become slaves to the Romans, the entire remaining population of 960 men, women and children committed suicide by jumping off the cliff to their deaths.

Most photographers visit Masada from either Jerusalem, or when staying overnight in Ein Bokek on the shores of the Dead Sea. The latter is preferable when you want to climb the snake path to witness a truly memorable sunrise. It takes around 30 minutes to climb at a reasonable pace, and you may want to arrive before sunrise to capture swirling clouds appearing over the Jordanian mountains. Sunrise can yield images where the canals joining both ends of the Dead Sea appear in a gold colour.

After getting the shot, you can wander the ruins of Masada at your own pace and take advantage of the low angle sun to capture the details and textures in the ruins and barren, mountainous surrounding landscape. The south-west corner offers a spectacular panoramic view over layers of the surrounding mountain and gorge below. After the rains, you may be lucky enough to include the waterfall in your shot. This would create a stunning panorama.

On the southern side, you will find an ancient Mikva [ritual bath] with a makeshift window [image at header]. Including the rock wall and view outside is best captured with the camera’s bracketing or HDR feature to increase the dynamic range. Next to the Mikva are steep steps that lead to a deep water cistern. If you are here at the right time of day, you can see the shaft of light entering, which makes for some interesting images.

Continuing around the top of the plateau brings you to other ruins and viewpoints until you arrive to the northern tip, where you can descend the steps to capture Herod’s palaces. You can easily spend half a day on Masada photographing and learning about this fascinating fortress set in a magnificent location. Regarding which camera equipment you should bring, we recommend an ultra wide angle and a medium to long telephoto lens. A light travel tripod is useful if you plan to carry it up the snake path for sunrise and for the interior of the cistern. Also, a graduated neutral density filter is invaluable to balance foregrounds with skies. When the sun gets higher, a polarising filter may also be useful have with you.

Masada is one of our favourite photographic destinations, and we go there on private day trips as well as group multi-day photo workshops. It is shown in it’s glory during sunrise, Golden Hour and sunset. Please feel free to contact us with any queries you may have regarding our tours and workshops there.

Here is a useful link of sunrise and sunset times for Masada.