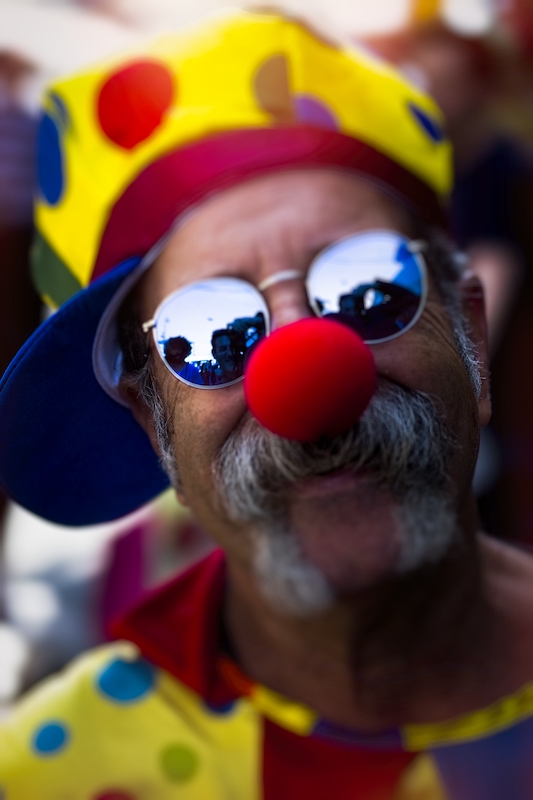 Photography in Israel during the festival of Purim

Photographing the people of Israel during the festival of Purim can reward the photographer some truly stunning images. Fun, frolic and irony in a sea of colour with a carnival atmosphere will surely be a highlight for street, documentary and environmental portrait photographers visiting Israel. Parties and parades take place throughout the country, and some of the most unique and politically incorrect costumes can be found anywhere on earth.

People of all ages, from 8 months to 80 years old participate in celebrations and street parties, and is one of the most widely celebrated festivals in the country. Celebrated by secular and religious Jews alike, Purim is the best time of year to enjoy street parties, raves and even the highly amusing Zombie Walk in Tel Aviv. Check out this video of Aladdin on his magic carpet negotiating the streets of Tel Aviv.

Purim is an annual festival that takes place each year around the 3rd week of March. In 2019, Purim begins on the eve of March 20, with celebrations in most of the country on the 21st, but with the exception of walled cities such as Jerusalem holding celebrations on the following day. Dating back to the Bible, and inscribed in the Book of Esther, Purim commemorates the biblical tale of the averted genocide of the Jewish people in the Persian Empire, some 2,500 years ago.

The story of Purim is traditionally read twice [once on the eve of the holiday, and once on the day of the holiday]. The story tells of Mordechai [the good guy] and Haman [the bad guy], and the Persians plan to annihilate all the Jews, and the collaboration of Queen Esther and her new husband Mordechai in averting disaster. The reason for dressing in costumes is to help us see the world from a different perspective, while overwhelming amounts of alcohol is consumed until one cannot tell the difference anymore between the good guy and the bad guy!

But we find Jerusalem in particular the most amazing location to witness, photograph and participate in during Purim. The ultra-orthodox Jewish communities which are typically associated with modesty and simple, long dark clothing, transform into fancy dress of the most surprising and creative themes, while individuals, tanked up on vodka stumble through some of the world’s most religiously observant neighbourhoods. Visitors can witness the spectacles of joyful and outlandish behaviour that only occurs once a year, and consequently give the photographer a unique insight into the lives of the Haredi community.

Purim is our favourite time of year for street photography, and we will be shooting up the streets of Tel Aviv and Jerusalem on March 21/22, 2019. For anyone interested in attending this event, please contact us for further information. We would be delighted to have you join us!