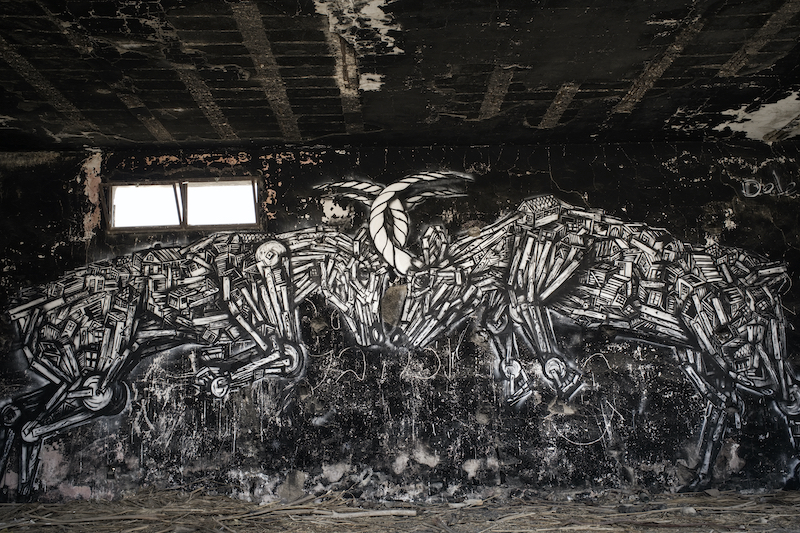 When one thinks of photography at the Dead Sea, it is usually associated with an arid desert landscape, rocky mountains, turquoise waters and salt formations. However, located at 430m below sea level between the monotone rocks and turquoise blue colours at the northern shores of the Dead Sea in Israel, a series of Jordanian army barracks lie in ruin. Abandoned during the 1967 Six-Day war, these decaying structures now serve a different purpose – Street Art. Like many aspects of Israeli life, the irony of political-social messages through stark colour in the middle of one of the most barren locations and inhospitable climates found anywhere in the world, could only be created in Israel. Gallery Minus 430 [named after the depth below sea level] is the organisation responsible for raising awareness on various issues related to the Dead Sea. Artists from all over the globe as well as local artists have come to this location to contribute their vision through Street Art. 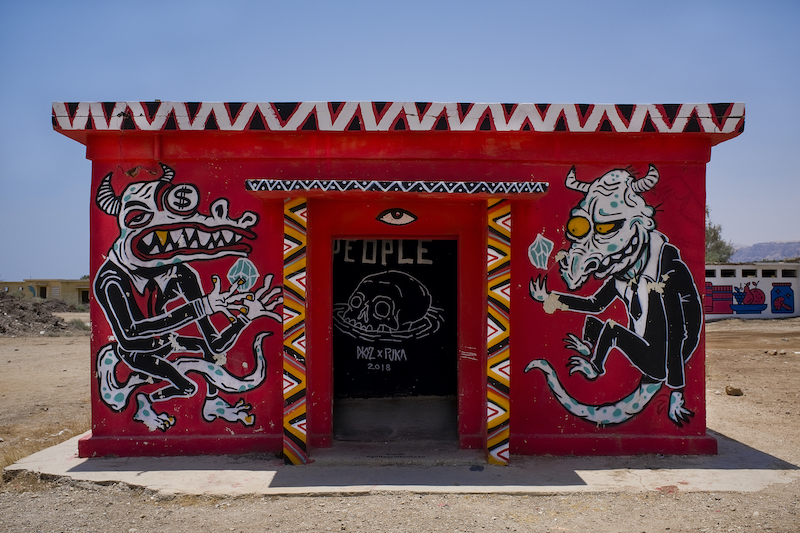 Inspiration for their works is predominantly inspired by 3 themes: Rescue efforts to save the Dead Sea, the geographical situation and impact of the receding waters, and the harmonious interaction of various local communities. The project was established in March, 2018 and to date, recruited 35 artists. Thought-provoking, whimsical and bold, the walls are covered in colours depicting animals, unique cartoons and political messages screaming out to save the Dead Sea. For photographers en route from Jerusalem to Ein Bokek, or to the mountain settlement of Masada, this is a great place to stop for some photography along the way. Open 24 hours a day, you can take advantage of shooting in the best light, combining the artworks with astro-photography, or even try your hand at light painting in the interior of the structures. Located at the entrance to the Kayla Beach, it is also an ideal place to wander around for those that would like to float in the Dead Sea. Being one of the sites that is safer to enter due to a lack of sinkholes, Kayla Beach and it’s “Lowest bar in the world” make for an interesting day out. 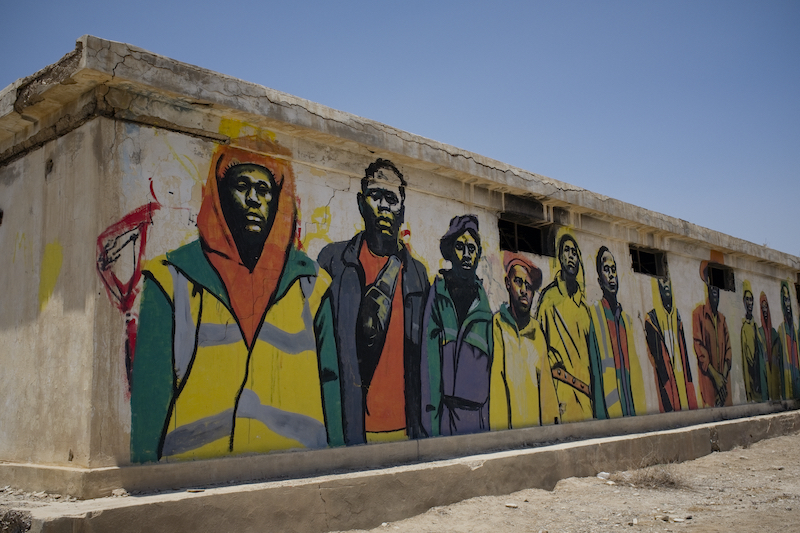 In one example of coexistence of the Jewish, Muslim and Christian inhabitants, a piece came from a Mexican artist named Libre, where he met 2 individuals at the Kayla beach – an Israeli baby from the Kayla Kibbutz, and a Palestinian man from the nearby city of Jericho. Seeing these people from different religions, backgrounds and ages at the beach together touched Libre’s heart and he subsequently used the theme of coexistence to record the moment. From another artist, a wall of barracks depicts the plight of African migrants escaping the dire economic situation back home. Another piece, with the distinctive bandages and plasters, come from a renowned Israeli artist known as Dede. Seen as a depiction of healing the catastrophe facing the receding waters, the plasters originally came about as his way of dealing with PTSD from events he experienced during his military service. For the lack of water and how it affects the local fauna and flora, animals painted on barracks, such as the camel covered in eyes – a beautiful piece by Uruguayan artist Alfafa, is a symbol of the dream in saving the Dead Sea before it completely disappears. 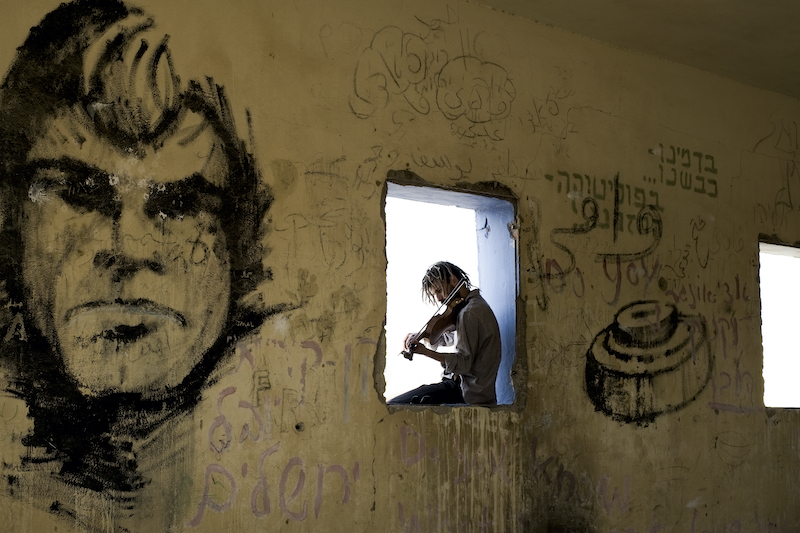 Since 1950, the amount of water flowing from the Jordan river in the north to the Dead Sea has dropped from 1.2 billion cubic metres/year to less than 200 million. Mainly due to the diversion of water from the Jordan river, lack of rainfall and the heavy production of potash to make fertiliser. These factors combined have caused the sea to shrink at an alarming rate. In 2013 the “Red Sea Peace Conduit” deal was signed between Israel, Jordan and the Palestinian Authority. A $1.1 billion dollar project with the objective of replenishing the Dead Sea while producing vast amounts of potable water. The project, located on Jordanian territory, would have a desalination plant near Aqaba. After producing drinking water from the desalination plant that has processed salt water brought in by pipeline from the Red Sea, the remaining highly saline liquid would be sent to replenish the Dead Sea, powering two hydroelectric plants along the way. The whole project sounds [in theory] like an ideal way to heal the land while strengthening ties between different peoples living in a region where water is more precious than gold. 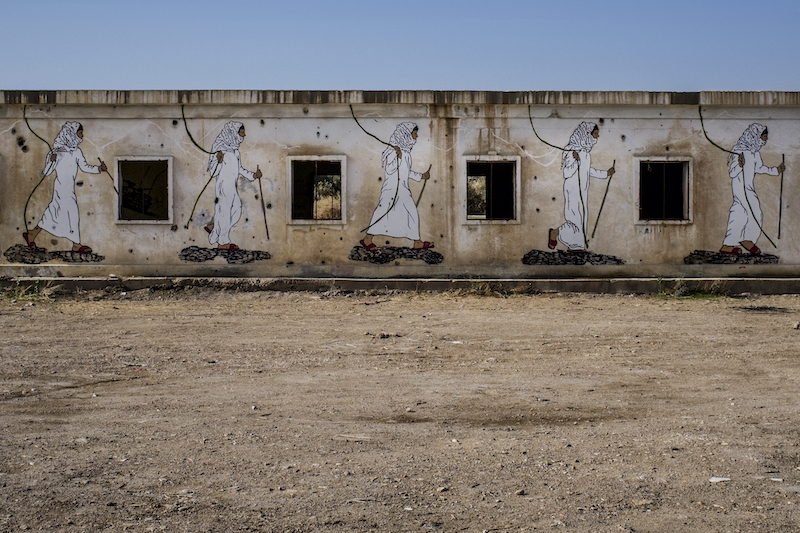